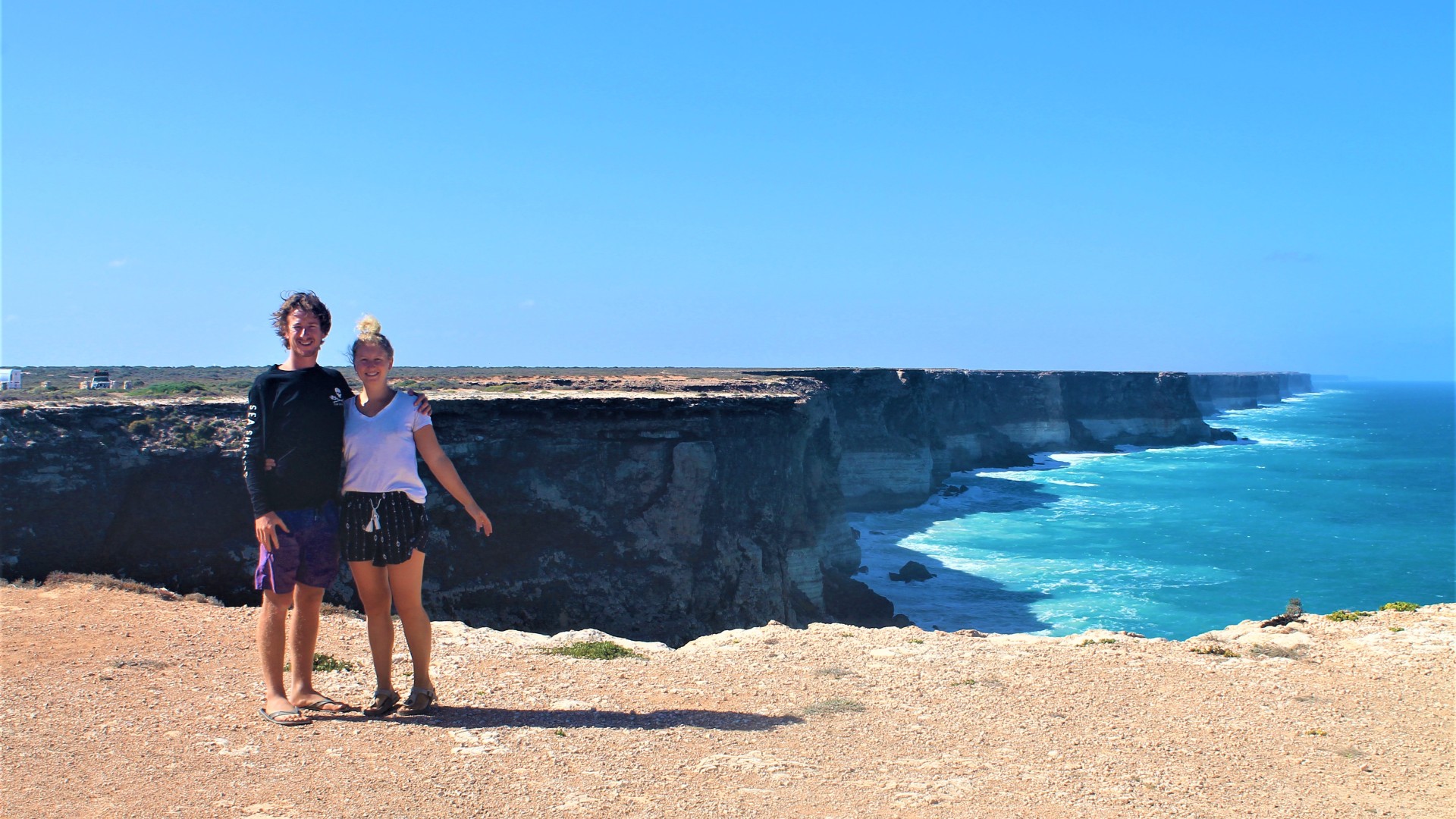 There are a number of ways you can get to Western Australia from the Eastern states, around the top through the NT, through SA via the middle across the Simpson desert (which is for extreme overland 4wding) or around the bottom and across the Nullarbor Plain via the Eyre Highway.

We are travelling Australia in a clockwise direction from Brisbane so we are crossing the Nullarbor Plain from East to West with the Nullarbor starting for us in South Australia at Ceduna. The Eyre Highway from Ceduna covers 481km before the Western Australian Boarder and continues for another 721 kms before finishing for us in a suburb called Norseman. If you plug it into google maps it is 1202 km long and they estimate that it will take you just over 12 hours, but we travel a bit slower than google thinks.

So we have already been through Ceduna and stayed at a suburb called Fowlers bay which is 143km and just over 2 hour trip. There isn’t much else of excitement any closer to the beginning of the Nullarbor but this place really did have a lot to offer. I think it did us good spending a couple of nights here where the only driving was on the sand dunes so after two good days of not driving on the road we were well rested for the big trip ahead. 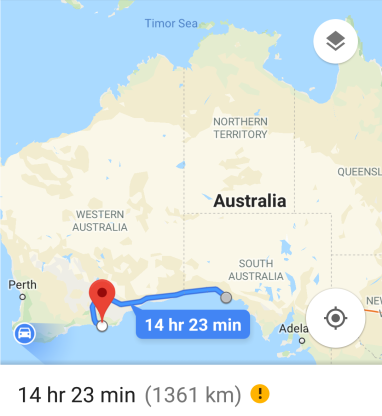 Sunday morning we fill up with diesel at the Liberty Nundroo just before we take off on the big trip and with 160 Litre fuel capacity that will get us approx 800-850km, we should be good to get across now with only one more fill. We had reviewed the fuel station locations on Fuel Map Australia and each fuel station is fairly well signed with a distance to the next available fuel station so you know if you will make it to the next stop or not without filling up. It doesn’t matter how you try and skin the cat by refuelling only part way across again, at one point or another you will need to fill up somewhere in the middle of nowhere and the fuel stations there know you have no other option and the price out there reflects such.

So we are off and are currently driving with The Chapman’s following along behind. It has worked out great that we have had another car to do the trip with for peace of mind but we later find out there is enough traffic that someone would help you out if you ran into trouble, even with poor phone service and being fairly remote. Nevertheless it was good to have some company on the long drive; I’m not sure who gets more excitement talking on the UHF, the Chapman boys (Jack & Bill) or Holly.

Just short of 2 hours in we come to the Nullarbor road house and get a quick picture with the iconic shed before powering on. 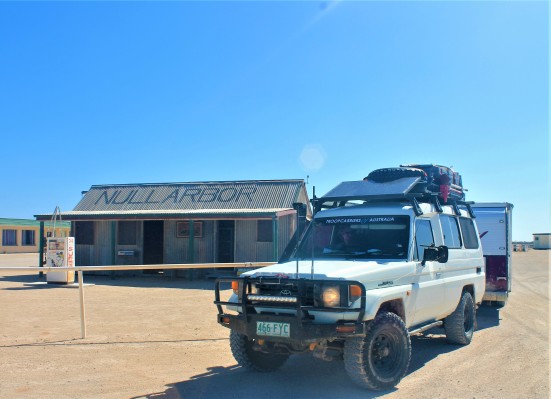 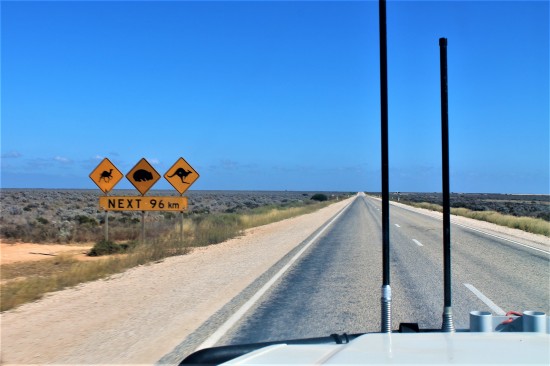 ‘The Head of the Bight’ is the most northern part of the Great Australian Bight and the next stop we have. Turns out it cost $7/person to enter and for us that’s a couple of beers at a pub so we decide to skip this attraction and head only a few minutes down the highway further where you can check out the Bight for FREE. This lookout was only a few hundred meters off the highway and was EPIC! There are a few more of these lookouts along the way but we only stopped at this first one. 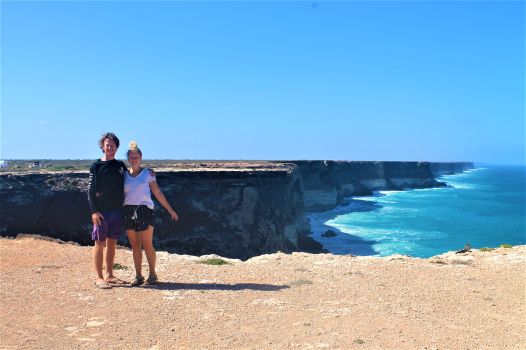 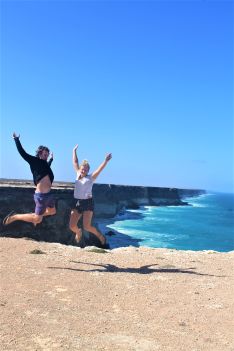 At the beginning of our big trip back in February Holly was the navigator and I was the driver. As the trip went on I think she became sick of sitting in the passenger seat and typical Holly, she wanted to give it a go. By this stage Holly had plenty of driving hours under her belt (from practise in SA) which was great and the only reason we are able to do some of the big drives that we need to do. At the beginning when she learning I was in constant fear of my life but if she has her glasses on she is a pretty good driver…  We have clicked well over 10,000kms in the Troopy towing the van by this stage so we are both fairly at one with how the Troopy drives. Sticking to about 90km/h in fourth gear on the highway is where we think it drives best. I mucked around for a while in the early weeks of our trip using fifth gear on the highway but whilst towing it seems to be easier to keep it in fourth even when there are opportunities that you think you could use fifth. I didn’t read into it too much but a number of people say towing in fourth is a lot better for the gearbox box.

Anyway back to the Nullarbor. The Eyre Highway is good bitumen the whole way, single lane carriageway for the majority of the trip with over taking lanes fairly often, otherwise there are bugger all cars, so over taking is just a part of the drive. We are the ones being overtaken the vast majority of the time however were surprisingly not the slowest and did over take a few old buses.

The Western Australian border has a quarantine check point for those entering the state. It is mostly just fresh fruit and veg that you are not allowed to take in. They do have a little look around your car and in your fridges but the check was over and done with after only 5 minutes so it wasn’t that thorough. We had a similar quarantine check when we headed across to TAS, in SA there was no checkpoint but they had signs saying what you could and couldn’t bring into the state.  We are through the checkpoint with no dramas and now into Western Australia!!!

One of the other attractions on the Nullarbor that I was keen to do was play the Nullarbor links, the worlds longest golf course. There are holes scattered along the Nullarbor from Ceduna to Kalgoorlie. You can get a scorecard from the Ceduna information centre with the first hole being at the Ceduna golf club. The people managing the course must think they are running the Hope Island Golf course or something and try to charge $70 per person to play, so we give that a miss. You are in the middle of nowhere so if you did want to have a hit no one would stop you, but we decided that stopping would only slow us down.

We had spoken to a number of people along our trip so far who had crossed the Nullarbor many times and had sussed out how long realistically it might take us. We made the call we wanted to complete the trip in two days, with only one night stay as we didn’t want to drag it out unnecessarily and had so many place around the country that we are still yet to see.

The days we crossed we had perfect weather, we could not have asked for any better. The wind is something that certain people pay a lot of attention however we were in luck as for the days we travelled we had a tail wind, not exactly a common wind direction for this area.  Driving into strong head winds makes a huge difference on your speed and fuel consumption so we were laughing.

We had no real town in mind for our stop over nor did we have a distance we specifically wanted to cover but as the day went on we were covering a good amount of ground and decide with the Chapmans that we would push on to the roadhouse at Cocklebiddy. I don’t know if it was the time zone change or we were driving slower but we overestimated our capabilities and we got to a point where we knew we weren’t going to make the town before the sun started to go down. With pathetic excuses for headlights and the kangaroos starting to jump across the road we cautiously make it to Cocklebiddy road house just before it gets pitch black, the Chapmans roll in soon after and we push on a little further with them in front and park up for the night on a patch of gravel off the highway. Surprisingly it was pretty peaceful other than the odd road train steaming through. Day one we drove a total of 763km in around 10 hours after a few stops along the way and finish the day around a small campfire talking about how the day’s journey was nothing like what we had expected. 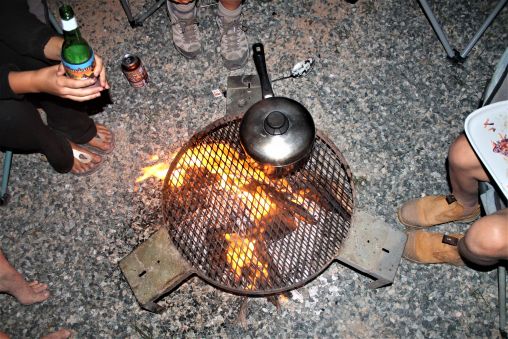 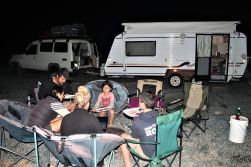 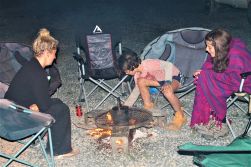 Camp Location:  Side of the Eyre Highway just after the Cocklebiddy Roadhouse, WA

Up Early Monday morning we head to re-fuel at Caiguna roadhouse. We have a shower here for $5 per person but that was the only thing that was reasonably priced here with the fuel at $1.93/L, ouch. 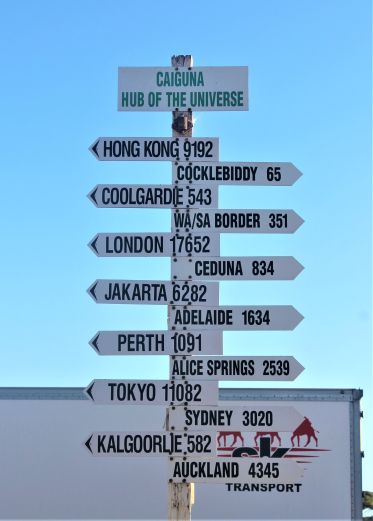 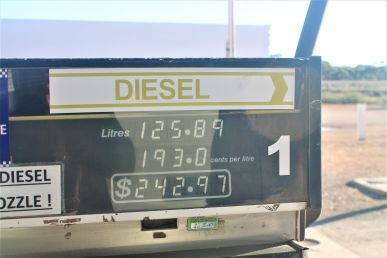 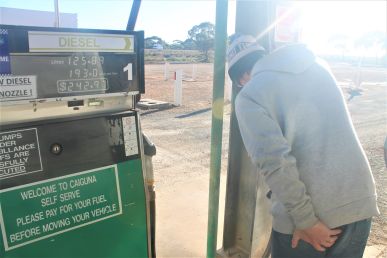 There are some big rigs parked up at the roadhouse that are heading to the V8’s in Perth, these flash trucks are carrying the race cars and all the equipment for the race. We are passed by five different racing teams over the next day and boy do they get along fast. 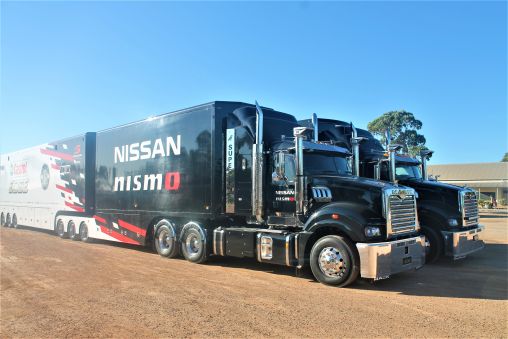 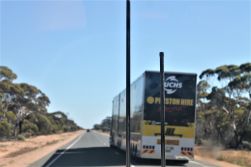 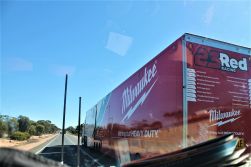 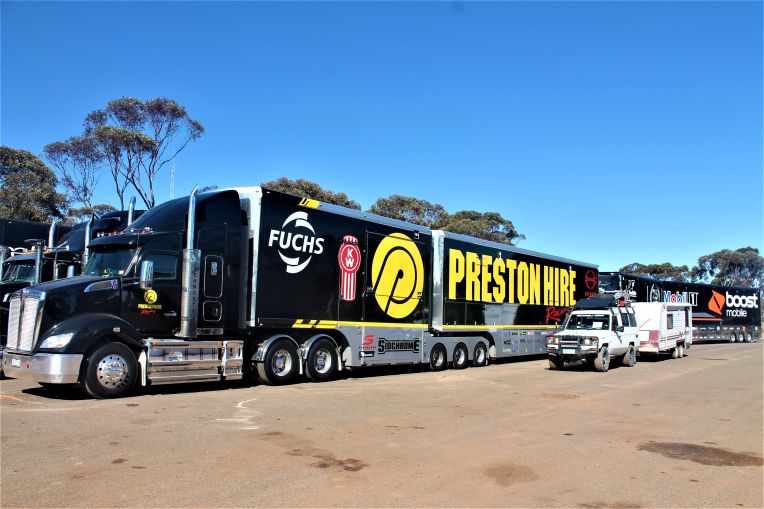 The Iconic 90 mile straight stretch of road starts just after the road house and this is what I think most people envision the Nullarbor to be the entire way, straight, baron and boring and we certainly had made this assumption as well but this section is only a very small part of what is a big journey with plenty to see. 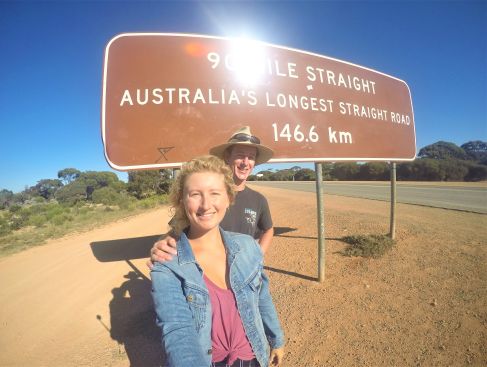 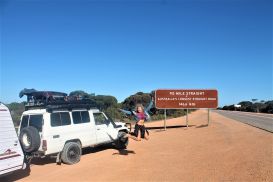 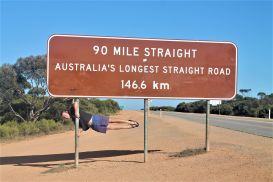 There isn’t much more of the Nullarbor left to tackle today as we had done such a great job day one in nailing out some big kilometres however once we finish the Nullarbor at Norseman we still have some driving ahead of us to get to camp near Lucky Bay. From Noresman we head South with 257km left until our camp which is further East of Esperance. We get into camp as the sun is going down just minutes behind the Champans and with a huge colourful moon we setup our camp right on the beach. The sand was solid enough the Troopy has no dramas getting the van in position. After two big days of driving we were all buggered and smash a few cans by the fire in what was one of the best beach camps we have had yet! 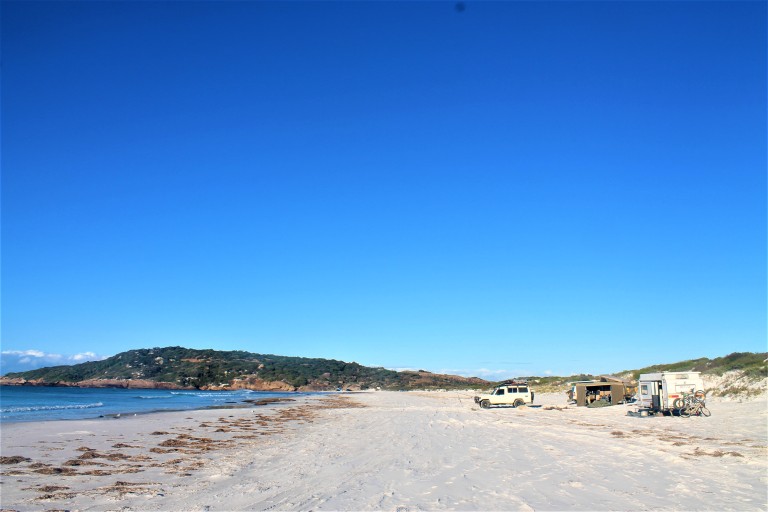 Will go into the camp and surrounding beaches that we visited in our next blog but we have made it to WA and are about as far away from home as we can get now so we are both pretty pumped about that!!